An Evolving Lent: From Soup to Poetry 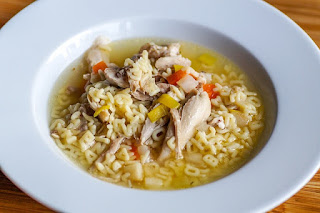 When I was a child, Lent always meant soup and bread. For Wednesday evenings during a six-week period on from February-April at Lord of Life Lutheran Church in Renton, Washington, I could have as much soup and bread as I wanted. I loved that, because those years of my memory were lean years in my household. Church was a place of plenty, with women and men telling me, "of course you can have more." There was a worship service, but I barely remember any of that. The idea behind soup, I was told, was simplicity, and Lent was a time of simplicity. I did not ponder simplicity much. I liked being full, and people seemed happy to be together.

After I became a pastor in training and then ordained, I found that many of my colleagues were burdened and miserable, and seemed to enjoy saying so. I became more aware that people "gave something up" for Lent--representing fasting. People starting using the word "journey" often, which sounded more like a death march. Sure, we would tell the story of Jesus' death, but the agony seemed misappropriated or misplaced. I was not quite sure what to make of all the piety.

With nearly 20 years of ordained ministry under my belt, I am letting go of some of the piety I once thought I had to embrace during the 40 days of Lent. I will share the stories of Jesus' last days with my congregation, but I am not going to tell them how to feel. When it comes to facing mortality, whether it is Jesus, someone we love, or our own, experiencing such stories of mortality is a call to reassess priorities--maybe we will answer that call, maybe we won't. Such reflection can't be programmed to happen over a period of time. Grief happens not as part of a recipe, but organically.

The idea is to shake up the routine, cultivate the soil of our lives, and see what is revealed and what will grow in this next season of life. There have been times I have planted a garden, and other times I have planted trees. Sometimes it is enough for me to go on a hike and kick up the dirt. The Old English "lent" means "spring". Lent seems to be the time to stir up the soil of life, and see what will grow. Maybe that involves a solemn piety, but this season, I am pondering creativity. I am considering writing a story, a poem, or learning some of the basics of a new musical instrument. We shall see how these forty days unfold.
Posted by Joseph BW Smith at 10:31 AM