Regardless of how you feel about baseball as a sport or an activity, going to a baseball game provides some of the best shoulder conversation available.

While many decry social media and what it's doing to our ability to relate, I appreciate the communication opportunities social media provides. I get to craft what I share. To be sure, I still share stupid things on social media as much as I do in face to face conversation. But I prefer to have some sort of mediating presence, or else the communication can be overwhelming. Social media is good. Baseball is good. Sitting shoulder to shoulder with a friend or colleague takes a little bit of the edge off. Not that I am scared or intimidated. But I need time to think and reflect. Might as well be at a baseball game. Social media can't do it all, nor do I want or expect it to.

Over the past few weeks I've hit 4 baseball games at various levels of play. Ryan is much more extraverted than I am, but he also loves baseball. Even though it was crazy hot, that was overlooked for a day of watching the AAA Oklahoma City Dodgers. Ryan and I met on Twitter years ago. We have collaborated on a few projects, most notably the logo at St. John's. It was good to hang out. 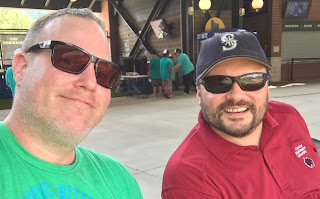 I sat in the bleachers of a Little League game in Independence, Kansas, where I watched the son of my good friends Zach and Melissa pound the strike zone. It was seriously impressive. Zach and I had not seen each other in nearly 7 years, and the baseball game was a great way to begin the reconnection. 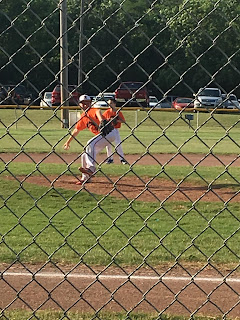 I've been to Safeco Field more times than I can count, but it's a regular ritual with a friend whom I met on social media. Adam returns to his home Seattle area stomping grounds on occasion, and we usually go to a game. We both wanted to see the new Griffey statue. The outing is a ritual, with good conversation. 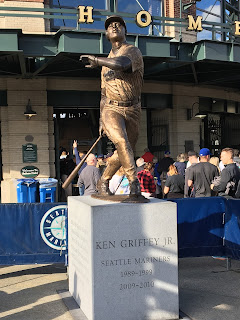 One of the goals of the Midwest swing was to reconnect with my old friend, Don, and his family in St. Louis. For some reason, my National League team was always the St. Louis Cardinals growing up. In college and beyond, I went to several Cards games with Don. I had not yet been to the newer version of Busch Stadium. Sometimes the ritual and rules of a baseball provide a good entry point to connecting. A Cardinals game is almost like church. It moves at a similar pace--liturgy, singing, and particular dress. The place is always decked out in red. Before the trip, I did not have an appropriate red shirt. I had to look the part. Don and I talked all afternoon, but he was also a tour guide, reminding me that the contexts in which we connect come with many stories. 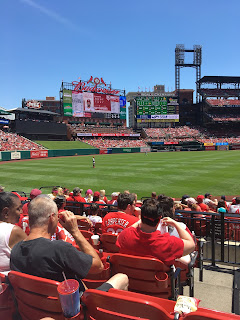 While some people don't get the benefits of baseball or social media, they have contributed to what it means for me to be human--investing in relationships. I am thankful to have the space to continue those investments this summer.
Posted by Joseph BW Smith at 11:31 AM