One of the trips I wanted to take during sabbatical was reconnect with some old friends who were instrumental in surviving some of my transitions of early adulthood. St. Louis, Missouri is like a second home. Don Volansky and his family took me in when I was a terrified 18 year old who had moved to Lawrence, Kansas from the Pacific Northwest. I was wondering what in the hell I had gotten myself into at the University of Kansas; the Volansky family made sure I had a home away from home, even if only for a few times per year. This Roman Catholic family joyfully adopted a Lutheran son.

When I lived in Sioux Falls, it was a little easier to pop down to St. Louis. With kids, work, and distance, it's not as easy anymore. What was a visit every 1-2 years has become more like every 5, give or take a few years. Don and I parent children with similar struggles. We both enjoy sports. We laugh for hours upon hours.

Going to a worship service is a different process with my Catholic friends than at home. We went to a St. Louis Cardinals baseball game yesterday and sat in the 90F heat--going to a mass after the game all hot and sweaty and in shorts seemed like a weird proposition to me, but why not?

It's hard to turn off my critical eye in a service. I corrected a point in the sermon in my mind. A bit of a foolish habit. But the homily was 5 minutes, and the priest described the Trinity by eventually saying, "It's okay to say, I don't know." It was great to sing in that grand space. I knew the hymns, and almost startled the people near me. It felt good not to have to worry about the details of the service. I suppose that is what part of my sabbatical is about, to actually feel some release. This decompression will be a slow process, but the pilgrimage to see old friends has put me in a better place. 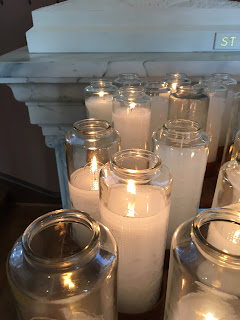 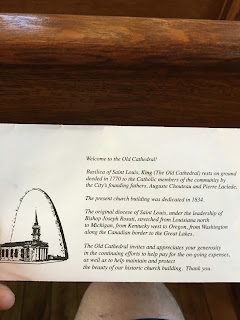 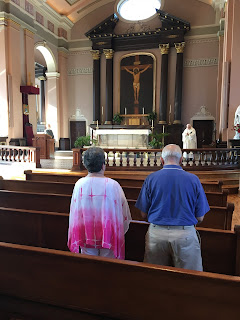